The No. 6 RCAF Dunnville Museum features a beautiful collection of well-preserved WWII Vintage aircraft that you can get up close and personal with.

Our half of Hangar 1 houses a WW II vintage Fleet Finch trainer built in Fort Erie.  Before the Airport was closed to flight operations, we had a Tiger Moth, a Yale, and a Harvard.

Students were required to graduate from an EFTS before coming to a SFTS such as the No. 6 at Dunnville.  Harvards and Yales were the primary aircraft used for training at Dunnville.

>> CLICK ON AN IMAGE TO VIEW IN LARGER SIZE

This photo shows a Yale, Harvard and Fleet Finch parked in front of the hangar after returning from the Tillsonburg Airshow on August 18, 2012.

The Tracker is just visible behind the Yale. 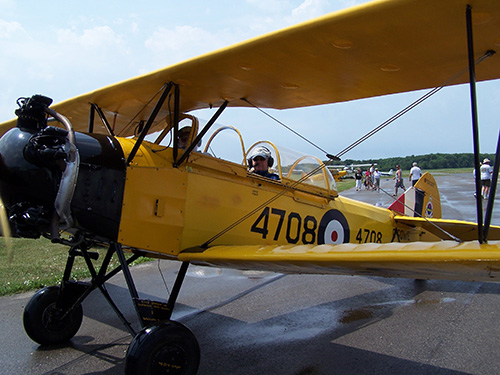 This is a refined version of a 1934 design with structural strengthening suitable for aerobatics.

It was built by the Canadian Fleet Aircraft Ltd. in Fort Erie.  With the RCAF designation C-GQWE this plane served at No. 7 EFTS Windsor and No 13 EFTS St. Eugene Ontario before going to St. Thomas for repair training.

This plane was extensively renovated by a local flying enthusiast. It was purchased by Russ Cameron, the owner of the Dunnville Airport, and donated to the Museum.  It flew right up to the closure of the Airport and was then mothballed, ready to fly again if the opportunity presented itself.

Thanks to a generous donation through the Samsung Renewable Energy and Pattern Energy Group, the Museum acquired Yale X9 as a static display.

After the French surrendered, it was purchased by the British Purchasing Commission for use in the British Commonwealth Air Training Plan.

Given the RCAF serial number 3416, it entered service on September 17, 1940 and initially served at No. 1 SFTS Camp Borden. 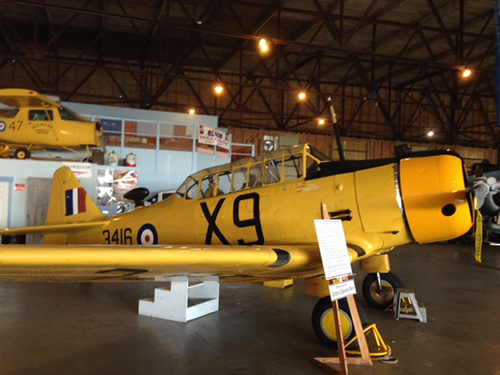 Suffering some damage at Camp Borden, it was sent to Noorduyn for overhaul and converted to an airborne wireless trainer (WT) at No. 9 Repair Depot in St. Jean, Quebec in mid-1943.  It was officially designated Yale W/T, given the code X9 and served at No. 1 Wireless School in Mount Hope, Ontario.

At the end of the war it was placed in stored reserve at No. 4 Reserve Equipment Maintenance Unit (REMU) located at Brantford, Ontario.

On September 26, 1946, it was made available for sale by War Assets and passed through several private owners.  Eventually it was purchased by Tom Dietrich, and was restored to a static display in the mid-1990s and placed on outdoor display at Guelph Airpark.

Yales, and the slightly more powerful Harvards, were the primary aircraft used to train pilots at the No. 6 SFTS. 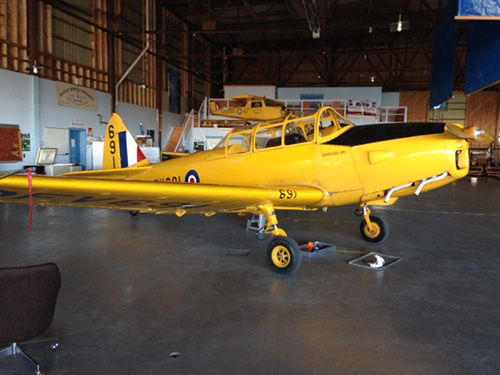 Thanks again to a generous donation from Samsung and Russ Cameron, as well as the Allan Foundation, Lynda Bain, James & Dorothy Bird, Jamie Logan, Pat Logan, Tim Logan and Joe & Lois Weir  we acquired a Cornell that is in beautiful condition.

Early experience indicated that Cornells were not sturdy enough to withstand the rigors of training student pilots.

This plane was in flying condition before being put on static display in the Museum.

We acquired a model of a Mosquito bomber, known to some as a 'Wooden Wonder,' because of its all wood construction.  The model was built by Bill Rice in memory of John & Laura Rice.

Hangar1 dividing wall up to ceiling

The museum had a Tyvek wall installed on top of the block wall that divides hangar 1 in half. The Tyvek goes all the way up to the hangar ceiling to block drafts and keep birds out of the museum.

Take In A Piece Of History Today

Come and visit our museum for a taste of the life of WW2 RCAF Trainees.